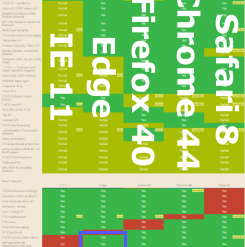 I’ve spent some time the past few months playing with Microsoft’s new browser called, “Edge.” Early on, it was announced as Project Spartan and was supposed to “feature an all-new rendering engine.” Later, the product was renamed to Edge. There was significant hype surrounding this new browser and Microsoft was clearly trying to put the bad reputation of IE in the past.

However, based on my research and tests, EdgeHTML (the new engine) is but a mere “evolution” of Trident (the old engine). A lot of Internet Explorer’s rendering problems remain and a large amount of standards work is unsupported. Of course, Microsoft is quick to support new features “invented by Microsoft” and proposed to the standards body. But, a great deal of features that other browsers support are missing. Below is a zoomed out screenshot of caniuse.com browser comparison.

The boxes in blue are the incremental improvements that Edge made over IE 11. Notice the large swathes of red that Chrome and Firefox have green? Those things are holding back the advancement of the Web. This disparity is a problem for designers and developers. Further, there are huge chunks of functionality turned-off by default and hidden behind “flags.”

Edge is not a new browser, it’s just a new version of a browser. It’s not a hallelujah moment for designers and developers, it’s a shrug and “hmm.” Despite the hype, the Web didn’t leap forward with Edge, but at least it’s moving forward.

Classically, in CSS, developers could detect Internet Explorer separately from other browsers. But now, Edge is getting thrown in with other Webkit detection, even though it doesn’t render the same as Webkit or Blink. So now, all CSS queries to detect Chrome, Safari and Opera need to be modified to not accept Edge.